Last night I had the opportunity to hear one of my favorite authors, Elizabeth Gilbert, speak at an event here in Dallas. Like most author events, there was a Q&A at the end. One piece of advice she offered to one of the audience members was to write the book for someone specific. She cited her work on Eat, Pray, Love as an example, telling us that it started out as a letter; a letter to her friend Darcy. Darcy, she explained, would have a very specific interest in her around-the-world trip. The letter would contain meaningful messages for her intended audience.

She went on to clarify that often when people approach her with projects, one of her 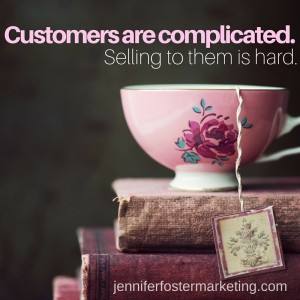 first questions is always “Who is this book for?” and almost always, the would-be author then provides uninspired, banal demographic information.

It immediately dawned on me that it’s easy to let our marketing efforts take the same approach.

The problem with these is that they oversimplify our customer. These data points, while salient, can lead us to neglect the human aspects of being a customer.

Now if you’ve been following me for a while, you know that in reality, I love data. “In God we trust. All others must show data.” Data-driven analysis helps me take emotion out of decision making; it helps me overcome any bias or preconceived notions that I’m bringing to the table. But what if, for the sake of this blog if nothing else, we set aside our empirical data collection and just think about who our customer is? Can you name him? Do you know where he lives? What car he drives? Does he even care what car he drives?

Thinking about the product you hope he’ll buy:

So for your next marketing project, think about who your customer really will be. Create a profile for him or her and think about them as you begin to generate more meaningful messages. If you aren’t sure where to start in constructing your customer profiles, take a look at my previous blog on the topic.

Can’t wait to hear what you think!

I’m becoming a really big fan of the author (and marketing strategist) Donald Miller (@donaldmiller). He’s a self-described introvert who writes about his experiences in an insightful and somewhat spiritual manner.

I first read his book Through Painted Deserts: Light, God, and Beauty on the Open Road last fall and really enjoyed his ability to gain enlightened perspective from otherwise mundane, sometimes even aggravating, day-to-day events that you actually expect to happen over the course of a memoir focused on a road trip (Spoiler Alert: the van breaks down.  More than once.) As someone who likes to think I’m constantly on the quest for higher meaning in the mundane, I found myself being jealous of these two guys, a lot of miles and a 1971 VW Camping van.

This week, I’m about 60% through a second Miller book, A Million Miles in a Thousand Years: What I Learned While Editing My Life. This book is also full of Miller’s laid-back, introspective charm, but it is told from the perspective of collaborating to create a screenplay about his life. He and his colleagues often talk about the “character” Don and what he would, or usually wouldn’t do (regardless of what the real Don did or did not do.)

The process of seeing himself as a character invites Don to look at his life differently:  to live it instead of daydream about it. As a writer, whose life at one point is described as a “blank page” he notes that sometimes daydreaming is required to play out a storyline or to develop a character, but that often daydreaming topics, such as one’s own success, serve no one.

I think it can be the same with content creation and marketing. In an industry where we’re challenged to be constantly creative it can be hard to keep our content authentic and meaningful. In the case where our characters are often products or services we can overlook the actual story of the product or service we’re offering.

That’s where we become the storytellers, just like Miller.

“Here’s the truth about telling stories with your life. It’s going to sound like a great idea, and you’re going to get excited about it, and then when it comes time to do the work, you’re not going to want to do it. It’s like that with writing books, and it’s like that with life. People love to have lived a great story, but few people like the work it takes to make it happen. But joy costs pain.”

One of my bosses once said you’re not selling hammers you’re selling the ability to drive a nail. There’s a story there. Probably dozens if not more. Telling the story of the nail that holds up your kids’ treehouse, or that secures the fence that keeps your dog from running amok through the neighborhood. The story of the hammer nail connection becomes motivating and compelling for your hammer-buying customers; creates an emotional bond with them. And to all the nail-drivers of the past.

Let’s be honest, it’s hard to sit down and market products day in and day out — creativity is generally exhausting. Miller compares himself to a plumber by saying that he likely isn’t any more excited about writing than the plumber is about fixing a pipe. It’s easy to get excited about the idea, but then it’s time to sit down and do the work. To become the storyteller.

What sort of stories have you developed or seen that made a product or service more appealing? Tweet me or post your comments here. I also encourage you to check out Donald Miller’s blog at storylineblog.com.  He’s a successful marketer, too, helping brands create their unique marketing messages. According to his site, he’s consulted with brands such as Pantene, Ford/Lincoln, Chick-fil-a, Prime Lending and many more.